The island of Capri is located in the southern part of the Gulf of Naples. It boasts a unique beauty, so surreal that it has been associated since ancient times to many legends regarding mythology.

It was named “Capri” by the Greeks and Romans; they defined it as the island of goats due to the large number of animals in its surrounding area.
It was initially colonized by the Greeks, then became of Neapolitan possessions, and it was later exchanged with Ischia by emperor Caesar Augustus. Tiberius, who succeeded Caesar, built over 12 stunning villas on the island, which were named after divinities.

A period of decline began from this moment on, caused by fierce pirate attacks, which forced the inhabitants to leave the coast and fishing activities to occupy the island’s highest areas: thus the first two true agglomerates, Capri and Anacapri, were established, the two current municipalities.

The real awakening of the island took place around 1800, when after passing from the Normans to the Swabians and from the Spanish to the French, many artists and intellectuals became interested in its fascinating appearance.

This beautiful island has seen many world-famous visitors from the world of art, entertainment and culture, including writers such as Norman Douglas, Thomas Mann, Curzio Malaparte and Pablo Neruda, and was place of exile for many political refugees including the aforementioned Neruda and the Russian writer Gorkij, captivating everyone with its natural beauty.

Capri, certainly isn’t lacking in wonders! Whether it be Villa Jovis or Villa San Michele, the Gardens of Augustus or mount Solaro and mount Tiberio, right up to the Grotta Bianca and Punta Carena.

The true symbols of Capri are the “Faraglioni”, mighty rocks that rise with an arrogance that seem to want to touch the sky; the best way to admire them is certainly from the sea, crossing the arc of the “Faraglione di Mezzo” and admiring the other two rocks: “Stella”, and the Faraglione di Fuori, also known as “Scopolo”, where the famous blue lizard lives.

Even in Roman times, this area was a site of great interest, proof of which are the numerous villas, resting along the shoreline, facing the Faraglioni.

Another great attraction is the world famous Grotta Azzurra, a natural cavity that is 60 meters long. Visitors, on small wooden boats, the only ones that can fit through the small entrance, are given a unique sensation. The initial darkness that one comes across in the first part of
the grotto immediately leads to a heavenly blue, that is both transparent and
silver.

Capri definitely offers the best solution for shopaholics who are desperately looking for the latest fashions; they’ll easily find what they’re looking for in Via Camerelle, famous throughout the world for the luxury of its stores. In addition to the designer shops, Capri’s alleyways boast a large number of craft shops, including pottery, sandals and areas where sculptures, paintings and works of famous artists are constantly on display.

A must see is the “Carthusia” workshop, a brand of perfumes made solely with the island’s flowers, established in 1948, but with much more ancient origins.

During this year the old formulas of perfumes made by the Prior of the Certosa di San Giacomo dating as far back as 1380 were found, hence the name “Certosa”, which became the current “Carthusia”.

And of course there are prestigious clubs and discotheques for the younger crowd, but its main square is the hotspot of Capri nights.

The square comes alive with music and folk dancing, and celebrities from the entertainment world mingle among the inhabitants while sipping a good cup of coffee.

The small red train links Marina Grande to the historical center in just a few minutes, offering the scenery of the entire Gulf of Naples. Departure is from Capri and Marina Grande approximately every 15 minutes and the ticket can be purchased at the ticket office.

The bus lines cover most of the non-pedestrian areas of Capri and Anacapri.
The influx of tourists in the summer means continuous timetable variations so we recommend you find out the departing times in advance at the ticket office and also buy the ticket.

#FrankSinatra said that "#Orange is the #happiest

A #journey into the great #tradition of #Italian #

One of the most #iconic and #romantic places on th 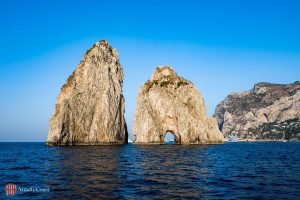 The island of Capri is located in the southern part of the Gulf of Naples. It boasts a…