Pompeii, the Neapolitan city that lies at the foot of Vesuvius, appears to visitors as a modern and cosmopolitan center. What makes it unique is that it encompass “two Pompeii”, two realities of the same city, two sides of the same territory but from different ages.

Ancient Pompeii is certainly the most fascinating part of the city which attracts many tourists, artists and intellectuals who travel to these lands: pagan people lived here, whose lives were buried as a result of the Vesuvius eruption in 79 a.d.
Faith has it that in the sixteenth century, during the construction of an aqueduct, these ancient ruins were discovered.

This remote city, the remains of which thrill all those that are lucky enough “to walk” on the inside, is probably the only site that still manages today to revive the everyday life of an ancient people.

The New Pompeii owes its construction to Beato Bartolo Longo who, after being responsible for the care of the local heritage, built the Santuario della Madonna del Rosario, around which the current city center was built.

#lunch with #view at @brunopositano, a few steps f

Postcard from Paradise! Thanks to @vitofuscostudi

Welcome to #Procida, the #italian capital of #cult 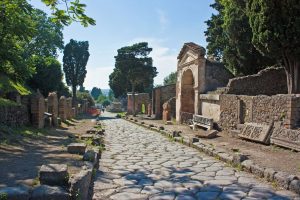 Pompeii, the Neapolitan city that lies at the foot of Vesuvius, appears to visitors as a…