Located about 350 meters above sea level, the hamlet found just above Positano, is located at the foot of the Lattari Mountains, and offers wonderful landescapes.

It is dominated by the characteristic “Mount Gambera“, rock punctyred by an impressive natural arch, wich the inhabitants associate with an ancient relious legend, defined by the Romans “Mons Pertusus” (hence the name of the village). The first inhabitants who settled there were nomads from Paestum, who fled following a bloody Saracen invasion,escaped following a Saracen invasion, which settled in the current “Pestella” area (Little Paestum).

Just above this neighborhood there is the Church of Santa Maria della Grazie, which, despite various renovations, maintains its Renaissance architectural appearance intact, from which it transpires linearity and simplicity.

The village appears today as a place in which to feel still in full with nature, enjoying the many paths present and offered glimpses, between romantic walks in the green and electrifying climbing.

#lunch with #view at @brunopositano, a few steps f

Postcard from Paradise! Thanks to @vitofuscostudi

Welcome to #Procida, the #italian capital of #cult 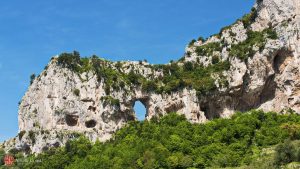